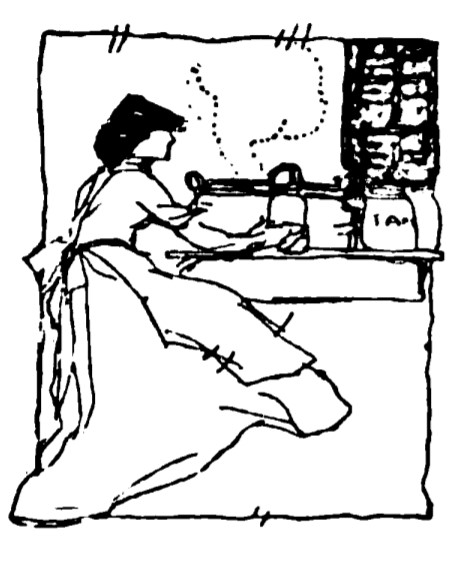 These are six corn recipes from 1917 and were printed in The Dayton Herald on October 11, 1917.  The first and second prize corn recipes are ways to preserve corn.  The first recipe is a simple way to dry corn using the sun or the oven.  When you are looking at Mrs. Patterson’s canning corn recipe, please keep in mind to remember proper vegetable canning techniques .

The next winners in the corn recipes is Mrs. McDowell’s Scalloped Corn which is corn mixed with flour, butter, eggs, milk, and seasoning then goes in the oven.  Then it is Mrs. Hoffman’s Fried Corn is an easy recipe of corn that cooks in butter and lard and seasoned with salt and pepper.  The fifth prize is Mrs. Hampton’s Corn Pudding which is corn with beaten egg yolks and whites with sugar, flour, butter with salt and pepper seasoning.  It is then baked.  The last one in the corn recipes is Mrs. Hall’s Corn Oysters which is corn mixed in a batter of and dropped into a pan with hot butter and browned on both sides.

Select only young and tender corn for drying and prepare as soon after gathering as is possible.  Cook in boiling water from two to five minutes, long enough to set the milk.  Cut kernels from the cob with a sharp knife and spread on trays to dry.  The corn may be dried in the sun, but if the weather is not favorable, dry in oven, stirring occasionally and finish drying in sun.  The average yield is one pound to the dozen ears.  Tin cans or fruit jars make good receptacles for storage of dried vegetables.

Select nice full grained ears and after cleaning well, removing all the corn silk, cut off cob.  Measure ten pints of corn, put in large kettle and to this add one cup of sugar, one scant cup of salt and one quart boiling water, put on fire and cook 15 or 20 minutes, stirring constantly.  This amount makes four quart jars.  I prefer glass self-sealing jars and which I always sterilize thoroughly.  Fill the jars full and cover to top with juice, seal tight.  When opening in winter empty contents of jar in large pan and add one-half gallon of fresh water, put on fire and let come to a boil, then pour all juice off and add milk, butter and cream to taste.  This is delicious and just like fresh corn off the cob.

One dozen small ears of corn, two cups of scalded milk, one-half teaspoonful of slat, one teaspoonful of sugar, two tablespoonfuls of butter, two tablespoonfuls of flour, two eggs.  Remove husks from corn, pick out all silk, then with a sharp knife cut a thin slice from the kernels and with a dull knife scrape the parts of the kernels that remain on the cob.  Melt the butter, add flour and seasonings, mix with milk and corn.  Add the beaten eggs last.  Pour in a butter dish, bake in a moderate oven for 30 minutes.  Serve with meat course.

Select six large ears of fresh Evergreen corn, remove the husks and silk, cut the corn from the cob, using a sharp knife.  Be careful not to cut too deep, then scrape the cob with the back of the knife, not hard enough to remove the hulls, but only the corn and milk.  Place a skillet on a slow fire in which has been melted one tablespoon butter and one tablespoon lard, add the corn, season with salt and pepper to taste and fry slowly for one-half hour, stirring every few minutes.  Serve hot.  This recipe will serve six persons.

Scrape 10 ears corn, beat the yolks and whites of two eggs separately, and add the beaten yolks to the scraped corn, with one teaspoonful sugar, one teaspoonful flour, one tablespoonful butter and salt and pepper to taste.  Mix all together and stir in a scant pint of sweet milk, then fold in the beaten whites of eggs and take in a slow oven, one hour.  Canned corn may be used instead of green corn.

One-half pint green corn, two tablespoons flour, one-half teaspoon of salt, one egg, one-half cup milk, butter.  Scrape or grate the corn from the cob, sift with flour and salt and mix to a batter with the egg and milk.  Stir the corn into the batter and drop by spoonfuls into a frying pan containing a little hot butter.  Brown well on both sides.